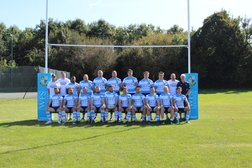 The host's pitch, being only three years old and having had a fortune spent upon it, held out well, but was unable to deliver decent flowing rugby in the persistent teeming rain. Warlingham were gifted a try straight from the kick off when the home side's kick out of defence was charged down and centre Ben Wimble tapped the ball forward and pounced over the line. Fly half Joe McEvoy added the conversion in the swirling wind. From the restart Warlingham kicked long into the Heathfield half and, when they forced the home side to infringe McEvoy slotted the penalty to put clear water between the two sides. The muddy water was on the pitch..

Heathfield forced themselves back into the game and, for a short while their pack had the ascendancy. However McEvoy inflicted more pain with a second penalty before the home side scrambled themselves a try on the blind side when their scrum half was given too much space by the Warlingham back row. The Heathfield forwards sensed that Warlingham were relaxing and, after a twenty metre maul, were unlucky not to score a try but were bundled into touch by the desperate visitor's defence. Flanker Richard Hayward made crunching tackles and Lock Luke Delderfield, returning from injury, showed well. Warlingham played sensible, territorial rugby and gradually advanced into the Heathfield half. Close to half time winger Jon Osborne switched in and out to dart through the defence and give Wimble a peach of a pass for his centre to score his second try under the posts. McEvoy had his kicking boots on and added the extra two points.

Heathfield came to the second half with renewed vigour and were again unlucky not to score when their winger chipped ahead and a chasing player scored - only to be penalised for being in front of the kicker. Their persistence was ultimately rewarded when they forced a five metre scrum from which a blind side move gave them their second unconverted try. Warlingham continued with territorial play and ran out worthy winners - although the ultimate winner was the foul weather which inhibited both sides from playing to their potential. Warlingham Chairman, Peter Wrightson said, "We had several players either injured or unavailable today so we were fortunate to secure the points, especially as the weather frustrated both sets of players."

Next Saturday Warlingham travel to Brighton in the third round of the RFU Intermediate Cup. Brighton top the league and will be a force to be reckoned with.